Franchising has become a popular option for founders who do not want to implement their own ideas but would still like to be independent.

What is a franchise?

When founding a company through franchising, a branch of an already established brand or “chain” is opened. One of the best-known franchise systems is McDonald’s: instead of opening their own restaurant, interested franchisees can open a McDonald’s restaurant and benefit from the experience, the products, the well-known brand name and the direct support of the franchisor, who has a vested interest in the success of your business.

In return, you accept a certain amount of entrepreneurial freedom, as you have to comply with the franchisor’s guidelines. On the other hand, you do not have to do everything yourself but can start directly with a little start-up capital. Compared to the development and realization of your own business idea, franchising is therefore relatively low-risk.

How does franchising work exactly?

Franchise or franchising is a distribution system based on partnership. This means that the business idea of a franchisor, which has already been implemented several times, is taken over by you as a franchisee and implemented as a franchise at a new location. In addition to the idea, franchising also allows you to benefit from the marketing concept, the corporate design, the rights of use and the suppliers – things that usually take a long time at the beginning of a classical foundation.

Also, you receive a range of support services and benefit. Your franchisor will also take over the quality management and the constant optimisation or standardisation of the business process. Training and further education are also included in the package in good franchising systems.

As a founder in franchising, you have an ideal start-up aid, because, in addition to these points, which you can simply take over, training and networking opportunities are offered regularly. This means that you benefit not only from the know-how of your franchisor but also from the regular exchange with other franchisees.

In return, you as a franchisee have to pay an entry fee and usually sales-based fees to the franchisor. Also, franchising involves a reporting obligation to the system.

Security for your foundation with franchising is also provided by the so-called territorial protection. This guarantees you as a franchisee that only your own branch is located within a certain radius. This, of course, provides in-house protection, but you should nevertheless check the potential location for external competition before you set up your franchise there.

Franchise in Spain: facts and figures

A total of 28 more networks than in December 2017, 14 Spanish and 14 foreign networks, clearly indicating more network plantings from other countries in the past year. Of these 1,376 franchises, the sector with the largest number of ensigns bearers – “fashion” with a total of 247 networks, 9 more than last year – are integrated into eight sub-sectors, followed by “hotels and restaurants” with 196 networks – 2 fewer than in 2017 – and “beauty/aesthetics” with 111 networks – 6 more than last year’s report. 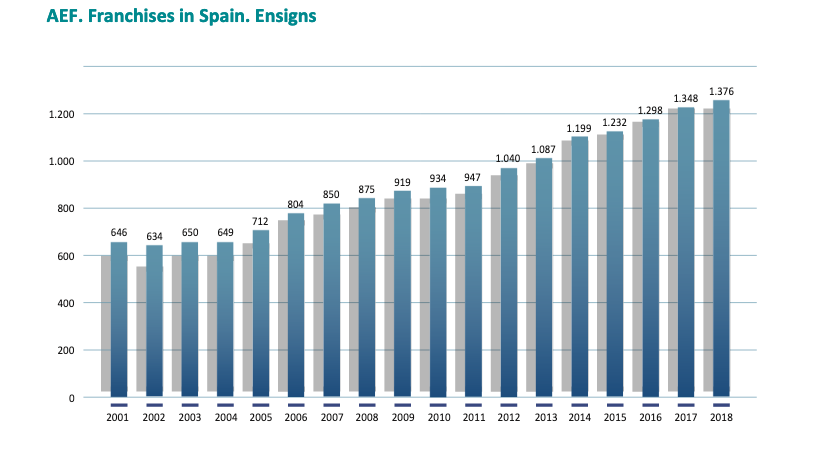 All franchise rules are defined in the Spanish Civil and Commercial Code. It is a useful fact that a franchisor must register the franchise in the register of franchisors three months before opening.

There are both high investment opportunities for business and cheap franchises in Spain, which should be reviewed, before choosing one.

How to open a franchise?

Take the following 10 steps if you want to become a franchisee.

1. Choose the best franchise for you

With around 1,000 existing franchise systems, the first step is to select the system that suits you. However, you will certainly have considered in advance which sector(s) are particularly interesting for you and what financing volume you can handle. This will quickly reduce the initially high number of systems. Also, you should make sure right from the start to look at high-quality and reputable franchise providers.

Once you have decided on your favourites for the franchise, it’s time for the details. You cannot, of course, judge business data and facts exclusively from the outside. In this context, franchise systems are subject to the so-called pre-contractual duty to provide information. The information that should be presented to you includes:

Even if a franchise runs successfully in other locations, this is no guarantee for your success. However, good planning lays the foundation for future success. Your own business plan will help you to validate the franchise system information and transfer it to your location. It is also advisable to conduct your own small-scale market research on-site, during which you interview potential target customers.

Equity capital is essential for the start of a franchise. Also, a loan is often required to shoulder the investments at the start. Based on the business plan, it is then a matter of convincing a bank to finance the project.

Franchise systems, for which the success of their new partners is important, offer extensive support in advance. On the one hand, this involves getting to know the corresponding franchise system better. On the other hand, extensive assistance is also given for the preparation of the business plan and the financing through the franchise.

The economic success of franchising often depends on a suitable location, especially if it is a restaurant or a retail store. Concerning the location or even the required size, there are usually concrete specifications of the system.

Also, franchisors have developed detailed criteria based on their numerous locations over time, which are very helpful in the choice of location. Make sure you take advantage of the system’s support.

8. Hire employees for the franchise

In a franchise system, you generally do not start as a lone fighter. Be it in the care sector, in gastronomy or with a delicatessen shop – you will hire employees right from the start. Put great emphasis on the selection of the right employees and let the system support you. Exchange ideas with other franchise partners to find out what qualities your employees should bring with them and how you should ideally proceed when recruiting for your franchise.

When deciding on a franchise, the selection of a suitable franchisor should be thoroughly thought through, because the franchisee and franchisor must work closely together. In addition to this, you should also seek the advice of a lawyer before signing the contract. If you need any advice on this topic, please contact our tax advisors by email or phone.

Do you need more information?

We use our own and third-party cookies to improve our services by analyzing your browsing habits. If you continue browsing, we consider you accept its use. You can change the settings or get more information here.