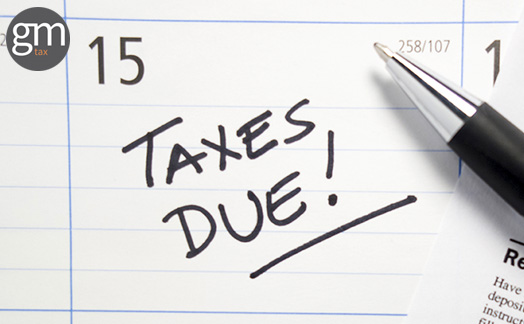 What is a double tax treaty?

A double taxation treaty (DTAs) is an agreement under international law with the help of which countries avoid the same income being taxed more than once for the same taxpayer for the same period of time by taxes of the same kind. This happens when taxpayers are either resident in two countries at the same time or have sources of income located in other countries than the country of residence.

In both cases, each state concerned can assert its own tax claim against the taxpayer. For the avoidance of double taxation, the country from which income originates (source country), on the one hand, withdraws or limits taxation in favour of the country of residence of the recipient of the income and, on the other hand, the country of residence exempts from its taxation or credits against its tax the foreign tax due on income which may be taxed in the source country.

Double taxation can occur according to the following principles:

How does the double tax treaty work?

When an individual or company invests abroad, the question may arise as to which country the investor’s income should be taxed in. Both countries – the country of origin and the country of residence – can enter into a tax treaty to agree on which country should tax the income from the investment to prevent double taxation of the same income.

Which double taxation countries have the most double tax treaties?

The UK has the largest network of tax treaties in Europe (131 countries), reflecting its long economic and political history of global trade and investment. The UK is followed by France (107 countries) and Italy (102 countries).

The countries with the smallest tax networks are Iceland (43 countries), Greece (57 countries) and Estonia (57 countries). On average, the European countries covered have 82 double tax treaties.

Here you can find the full list of the countries that have signed double taxation agreements with Spain.

With the internationalization of the economy in recent decades, various mechanisms have been established to avoid double taxation in the domestic legislation of each country, in addition, to having signed different Double Taxation Treaties. One of these methods is the deduction for international double taxation of Corporate Tax, which can be legal or economic depending on whether the same taxpayer supports two or more taxes of the same nature for the same income in different jurisdictions, or if the same income generates two taxes of the same nature in two different subjects, respectively.

In our today’s article, we will talk about the legal double taxation deduction, regulated in Article 31 of Law 27/2014, of Corporate Tax, more specifically about the impossibility of deduction of part of the tax paid for income obtained abroad in certain cases, in detriment of foreign income with a reduced profit margin, provided it is not operated through a Permanent Establishment.

What does the Spanish Corporate Tax Law establish?

The legal text establishes that, if the positive income obtained and taxed abroad is included in the taxable base of the taxpayer, it will be deducted from the gross tax payable the lower of the following two amounts:

Determining the amount that would have to be paid

According to the theory, there does not seem to be any problem, but in practice, for the quantification of the amount subject to deduction, several doubts may arise; even the Directorate General for Taxation itself varies the criteria to apply in different binding consultations.

The concept of the amount effectively paid abroad is quite evident, although it is worth emphasizing that if a tax incentive that reduces the amount to be paid has been enjoyed, such incentive will not be considered a satisfying amount for the purposes of the deduction.

On the other hand, when determining the amount that would have to be paid in Spain, more doubts may arise.

The logical thing – and what the DGT had been saying until a while ago, as a result of the binding consultation V0417-16 – would be that, for the purpose of eliminating double taxation, if in order to obtain the effective amount paid abroad, the income from foreign sources is multiplied by the tax rate of the country, for comparison with the amount of the full payment that would correspond to pay in Spain, foreign source income multiplied by the Spanish tax rate will be used.

But in another query (V4259-16) published by the same Directorate General for Taxation eight months later, specifies that expenses related to income have to be reduced and the deduction will be applied to the net income obtained.

What is being said in this new interpretation of the law is that, to determine the amount of the full payment that would have to be paid in Spain for the aforementioned income if it had been obtained in Spanish territory the net income must be taken, determined by the difference between foreign income and its corresponding expenses.

That is, it requires comparing income from a foreign source and the net amount corresponding to this income, which by definition can never be higher than the first. This criterion has been ratified by several courts, including the Supreme Court in several judgements.

This will generate the impossibility of deducting part of the tax paid abroad in the following cases:

Example: why can foreign income with a lower profit margin apply less deduction?

In order to see more clearly how the deduction works for double legal international taxation, we leave you with two different cases and how they would pay in each case. 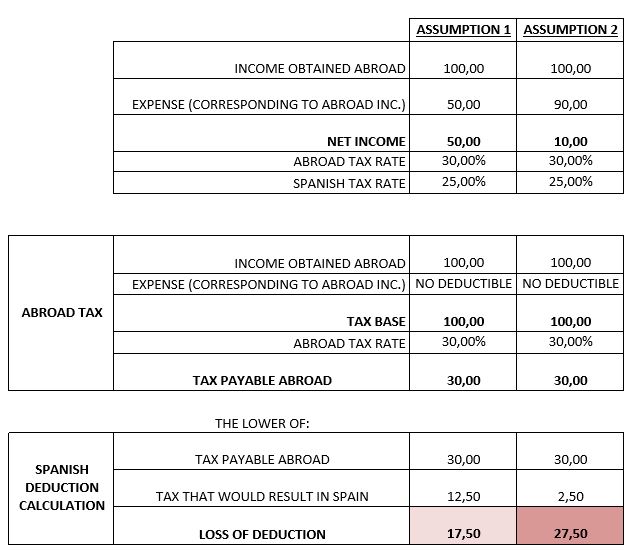 If your company obtains income that is taxed abroad and you can not apply the deduction for double taxation of Corporation Tax for the amount paid abroad, contact our tax advisors in Barcelona. We will analyze your case in detail and with professionalism, proposing solutions to this as operating through a Permanent Establishment abroad.